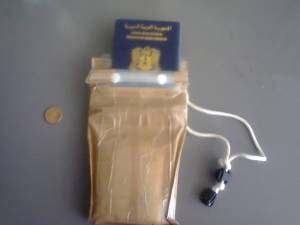 This is an example of the ‘material culture’ of migration. Almost every refugee in Piraeus has a similar pouch. Carefully constructed and waterproof this pouch contains the little money that people have, but most of all the valuable ‘papers’: passport and –upon arrival- the papers provided by the Greek authorities (all of them in Greek). All the refugees have learnt to use the Greek term ‘chartia’ (papers) even when they speak in their own languages. The pouch in this photo belongs to Ahmed (pseudonym), a twenty-five year old man who has come to Greece through Turkey after one failed attempt. Ahmed has survived a dramatic shipwreck in the coast of Turkey that has cost the lives of 42 people including several children. He has explained to us that once the ‘fare’ has been paid, smugglers on the Turkish coast are extremely reluctant to cancel the trip, even if the weather clearly does not permit the journey. Refugees are sometimes forced into the boats at gunpoint, sometimes with inadequate life-jackets. Ahmed finally survived and was rescued by Turkish coast-guars after more than 11 hours in the sea. He embarked on the same journey less than two months later and made it safe to Lesvos this time. Wasn’t he scared after his first experience? He was, but, in his own words “There is no turning back. I want to finish my studies, to work, to have a proper life”.

Talk To Us Cancel reply